Sensory Diet Has Gone to the Dogs

Moegley is my 6 year-old yellow Labrador retriever who has suffered with anxiety for his entire life.  He has demonstrated fear-based aggression through full-blown panic attacks.  About a year ago, I thought he was having a psychotic break. He was running around the perimeter of the house, jumping up on my kitchen table trying to climb out windows, fighting with his brother (my other dog Jack) and at times literally trying to crawl inside of me for what seemed like a refuge from his torment. He looked possessed and nothing I did soothed his terror.  After a night of no-sleep I called his vet and was referred to an animal behaviorist. The vet did discover an ear infection but also witnessed one of his panic attacks, which confirmed my gut instinct that his anxiety was out of control.

I went to visit the behaviorist to talk about what was going on.  She had many theories as to the sudden onset of this episode (from obvious and logical (such as pain from the ear infections), to a little far stretched (a bear may have been trespassing on his property) to just down right obscure (a spirit in the house). She did provide me with some tools to try at home and much needed reassurance.  As I was about to leave she said, “I have one more thing you might want to try.  It’s worth a shot.  Have you ever heard of Temple Grandin and her work with autistic children?”   Being an OT, she now had my full attention.  She continued on to say that someone had created an “anxiety wrap” for animals that suffer from anxiety and asked if I would be willing to try it on Moegley.  I ecstatically shared with her the work I do on the psychiatric unit, which includes using deep pressure strategies (such as weighted blankets & vests) and of course I was willing to try it with Moegley.   And so began Moegley’s sensory diet. For six months we had a strict schedule to help him self-organize his system, providing him with fun positive physical activities in hopes that it would provide him with a feeling of safety and security.

* A KongTM is a heavy-duty hollow rubber toy that can be filled with treats. Many times I will fill it with some of his dog food and add 1/2 mashed banana, plain or vanilla yogurt and freeze. It provides him with a treat that is mentally and physically challenging. He has developed many techniques to access the goods inside.

** A GreenieTM is a soy-based chew that helps with alleviating the need to chew, cleans his teeth and is a clue it’s time for bed.

In addition to these daily activities I was also advised to use a Comfort Zone D.A.P. TM(dog appeasing pheromone) plug-in diffuser. This releases the scent of a nursing mother dog, which is very soothing for distressed animals, and at times when his anxiety increased I would give him a few drops of Bach Rescue RemedyTM, an herbal concoction to alleviate stress and anxiety.

Every few days I would increase his time in the Anxiety WrapTM and within a few days of being on his sensory diet he was sleeping through the night.  He slept with the anxiety wrap on and actually would come running over to me when I would pick it up.

Almost 1 1/2 years later I can say his anxiety has dramatically decreased. Prior to Moegley’s sensory diet he feared going to the vets to the point that he would either refuse to get out of the car and/or go into a full panic attack which included loss of body function, trembling to the point he would collapse on the ground, panting and drooling profusely. He now easily jumps out of the car dressed in his Anxiety WrapTM and with a bit of encouragement and praise he breezes through exams, shots and even X-rays.

It’s been a stressful yet very rewarding journey in which I was able to carryover my professional knowledge and my passion for my dogs. 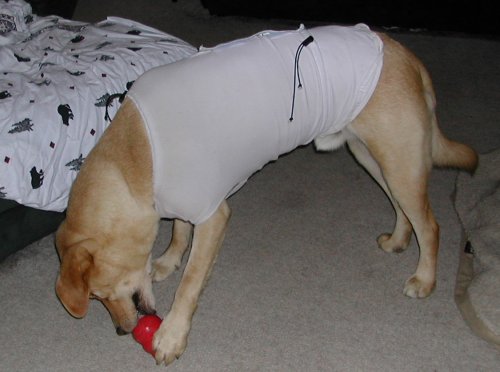 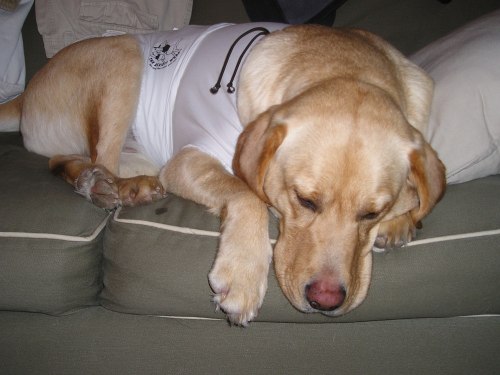 Links for products and services mentioned in this article:

Anxiety WrapTM: www.anxietywrap.com
There is an article written by an OT on this site.

Dr. Amy Allen D.V.M and all the staff at Riverbend Animal Hospital in Hadley, MA (USA)